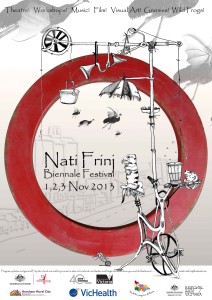 The Frinj goes virtual. In partnership with The Village, Dave Jones created a series of games, again with school children, which were pushbike powered and used the newly developed Oculus Rift virtual reality glasses. 8 Foot Felix also played a bike-powered performance by the creek. 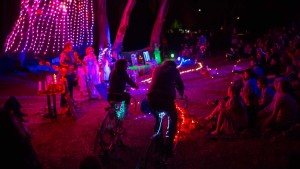 8 Foot Felix in collaboration with Dave Jones – Somethings’ a-foot in the dead of night!

Anthony Pelchen, in collaboration with some Frinj regulars and new faces, had a project called MARP – Malaysia Australia Raft Project. MARP embedded itself in some tents on the Verj. 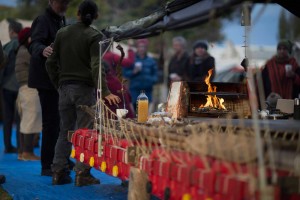 On a harmonium with a choir of 200 sheep and performer Tony Yap, singer- songwriter Kavisha Mazzella wowed audiences with her refugee anthem All God’s Beggars, she was joined by other former collaborators Soong Ro Ger, Frank Tagliabue, Trevor Flinn, Anthony Pelchen and Robert Millar, inspired by Roger’s 2012 Malaysian raft odyssey into an endangered rainforest with his cousin Andy Lim Kah Meng. 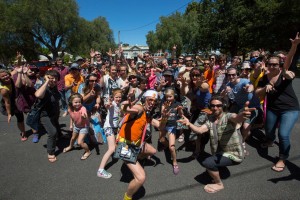 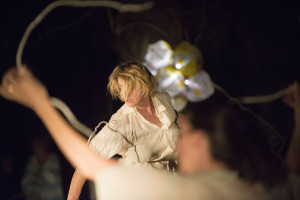 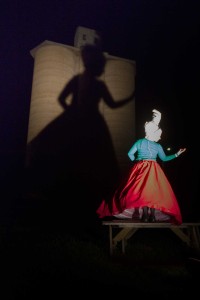 Isabel also performed in Jillian Pearce’s Opera in the Air, poised on rooftops and cliffs tops and surprising passers-by with her wonderful voice. There was a Gate Opening/Closing competition….. 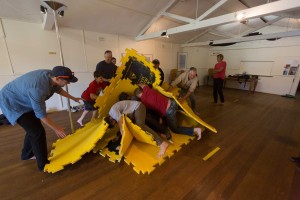 There was medical theatre in Transplant and Hula Hooping Ballet with Swan Song.

And the remarkable voice of Feeling the Ceiling (Frinj 2011), Isabel Hertaeg, returned with her show DEATH BY SOPRANO. And the surprise appearances of Opera in The Air, directed by Y Space.

Alison Eggleton curated a project called The Life of Main Street, 5 site specific installations at old business sites Main Street and so much more there’s not enough room to list it all!