The Frinj may have ended in 2002 through lack of momentum but after seeing a picture in a book of Shigeo Fukuda’s Lunch with Helmet On, and a conversation with Richard Smith, Greg joked to Jillian that he’d like to project a giant harvester onto the silo. This fitted in with what she had been thinking and a meeting was called of interested people. The Space and Place project was conceived. It included –

Interactive animations and projections by Dave Jones. He had recently created In my Day with the Natimuk Primary School and this was included in the show. There were Indigenous dancers and images, and live music. Mary French had created a number of shadow puppets with school’s workshops. Santha Press has worked with a local choir to create a beautiful score. The CFA and firetruck were involved. The highlight was probably the way in which theY Space aerialists interacted with the projections. 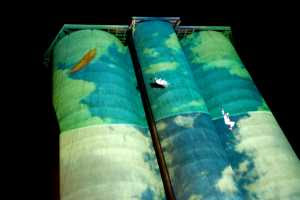 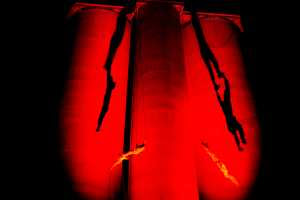 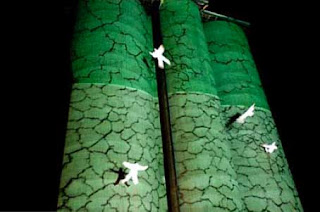 In total there was close to 100 community members involved, from a community of 500. It has been described as “the perfect community arts project.”

It also included the shadow sculpture, Combine-Nation by Greg Pritchard and Paul Hoskins. 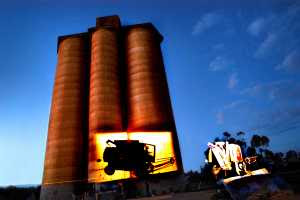 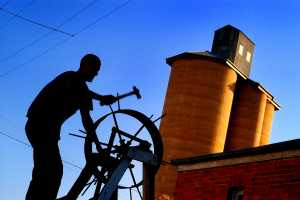 School children supplied the theme, which was ‘disasters’.

The first Hay and Thespian Mardigras really captured the town’s imagination, and has continue to amuse with the name that does describe the meeting of the Arapiles Community Theatre and the farming community.

Space And Place 2003 from ACT natimuk on Vimeo.

* Space and Place was a huge hit, and Jillian was asked to repeat it as the feature of the Regional Arts Australia conference, Meeting Place which was held in Horsham in 2004.